In this section we will discuss how to pick the best action for the robot at each state to maximize the return of the trajectory. We will describe an algorithm called Value Iteration and implement it for a simulated robot that travels over a frozen lake.

To make the notation less cumbersome, we will often write \(\pi(s)\) as the conditional distribution instead of \(\pi(a \mid s)\).

We next break down the trajectory into two stages (i) the first stage which corresponds to \(s_0 \to s_1\) upon taking the action \(a_0\), and (ii) a second stage which is the trajectory \(\tau' = (s_1, a_1, r_1, \ldots)\) thereafter. The key idea behind all algorithms in reinforcement learning is that the value of state \(s_0\) can be written as the average reward obtained in the first stage and the value function averaged over all possible next states \(s_1\). This is quite intuitive and arises from our Markov assumption: the average return from the current state is the sum of the average return from the next state and the average reward of going to the next state. Mathematically, we write the two stages as

This decomposition is very powerful: it is the foundation of the principle of dynamic programming upon which all reinforcement learning algorithms are based. Notice that the second stage gets two expectations, one over the choices of the action \(a_0\) taken in the first stage using the stochastic policy and another over the possible states \(s_1\) obtained from the chosen action. We can write (17.2.2) using the transition probabilities in the Markov decision process (MDP) as

An important thing to notice here is that the above identity holds for all states \(s \in \mathcal{S}\) because we can think of any trajectory that begins at that state and break down the trajectory into two stages.

In implementations, it is often useful to maintain a quantity called the “action value” function which is a closely related quantity to the value function. This is defined to be the average return of a trajectory that begins at \(s_0\) but when the action of the first stage is fixed to be \(a_0\)

note that the summation inside the expectation is from \(t=1,\ldots, \infty\) because the reward of the first stage is fixed in this case. We can again break down the trajectory into two parts and write

This version is the analog of (17.2.3) for the action value function.

Both the value function and the action-value function depend upon the policy that the robot chooses. We will next think of the “optimal policy” that achieves the maximal average return

Let us observe that for a deterministic policy where there is only one action that is possible under the policy at any given state. This gives us

A good mnemonic to remember this is that the optimal action at state \(s\) (for a deterministic policy) is the one that maximizes the sum of reward \(r(s, a)\) from the first stage and the average return of the trajectories starting from the next sate \(s'\), averaged over all possible next states \(s'\) from the second stage.

Our developement in the previous section in (17.2.2) or (17.2.5) can be turned into an algorithm to compute the optimal value function \(V^*\) or the action-value function \(Q^*\), respectively. Observe that

For a deterministic optimal policy \(\pi^*\), since there is only one action that can be taken at state \(s\), we can also write

for all states \(s \in \mathcal{S}\). This identity is called the “principle of dynamic programming” (Bellman, 1952, Bellman, 1957). It was formulated by Richard Bellman in 1950s and we can remember it as “the remainder of an optimal trajectory is also optimal”.

We can turn the principle of dynamic programming into an algorithm for finding the optimal value function called value iteration. The key idea behind value iteration is to think of this identity as a set of constraints that tie together \(V^*(s)\) at different states \(s \in \mathcal{S}\). We initialize the value function to some arbitrary values \(V_0(s)\) for all states \(s \in \mathcal{S}\). At the \(k^{\text{th}}\) iteration, the Value Iteration algorithm updates the value function as

It turns out that as \(k \to \infty\) the value function estimated by the Value Iteration algorithm converges to the optimal value function irrespective of the initialization \(V_0\),

Value Iteration enables us to compute the optimal value function, i.e., \(V^{\pi^*}\) of the optimal deterministic policy \(\pi^*\). We can also usesimilar iterative updates to compute the value function associated with any other, potentially stochastic, policy \(\pi\). We again initialize \(V^\pi_0(s)\) to some arbitrary values for all states \(s \in \mathcal{S}\) and at the \(k^{\text{th}}\) iteration, perform the updates

This algorithm is known as policy evaluation and is useful to compute the value function given the policy. Again, it turns out that as \(k \to \infty\) these updates converge to the correct value function irrespective of the initialization \(V_0\),

The algorithm for computing the action-value function \(Q^\pi(s, a)\) of a policy \(\pi\) is analogous.

We next show how to implement Value Iteration for a navigation problem called FrozenLake from Open AI Gym. We first need to setup the enviroment as shown in the following code.

The following function implements Value Iteration, where env_info contains MDP and environment related information and gamma is the discount factor: 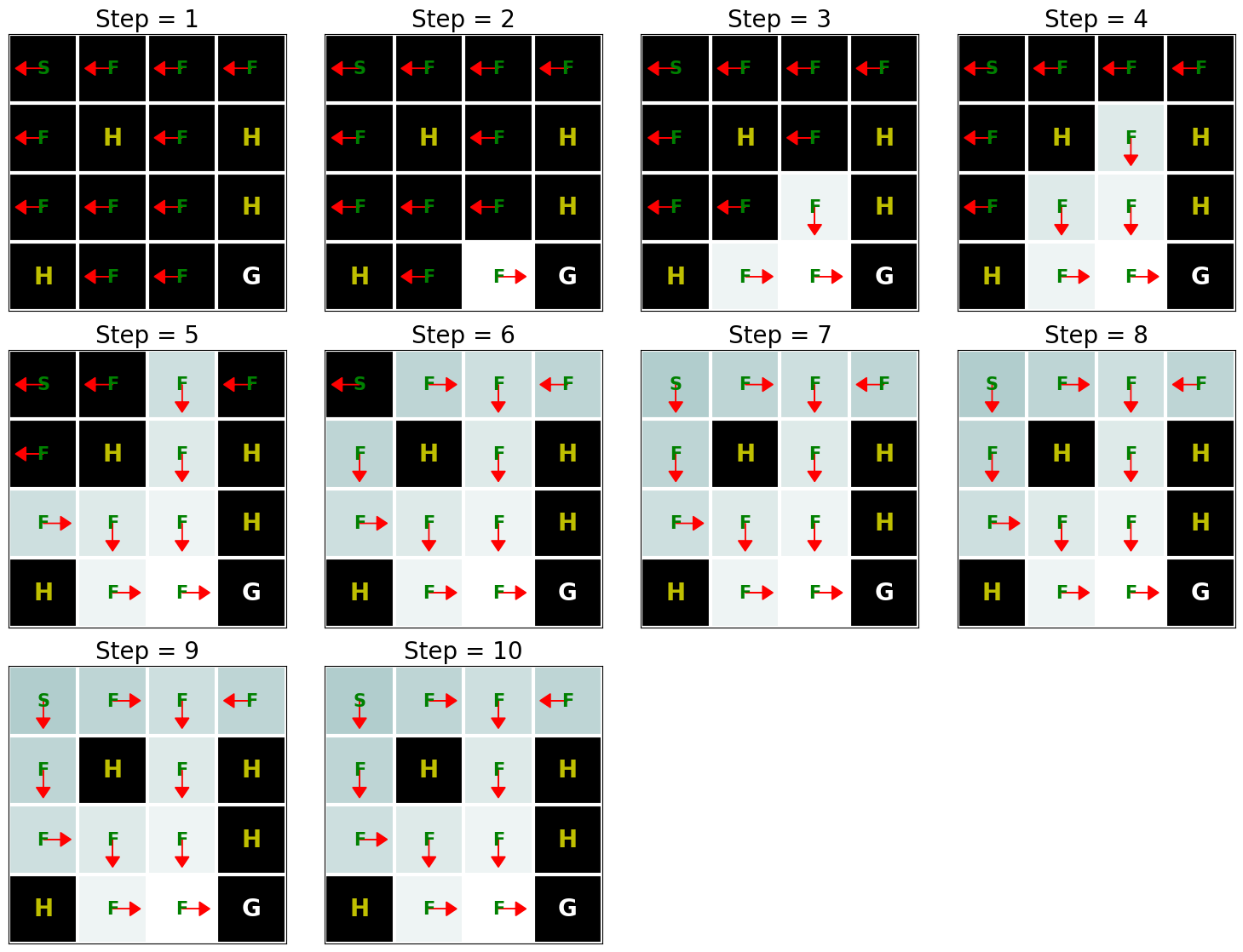