In the previous section, we discussed the Value Iteration algorithm which requires accessing the complete Markov decision process (MDP), e.g., the transition and reward functions. In this section, we will look at Q-Learning (Watkins and Dayan, 1992) which is an algorithm to learn the value function without necessarily knowing the MDP. This algorithm embodies the central idea behind reinforcement learning: it will enable the robot to obtain its own data.

Let us imagine that the robot uses a policy \(\pi_e(a \mid s)\) to take actions. Just like the previous chapter, it collects a dataset of \(n\) trajectories of \(T\) timesteps each \(\{ (s_t^i, a_t^i)_{t=0,\ldots,T-1}\}_{i=1,\ldots, n}\). Recall that value iteration is really a set of constraints that ties together the action-value \(Q^*(s, a)\) of different states and actions to each other. We can implement an approximate version of value iteration using the data that the robot has collected using \(\pi_e\) as

where \(\alpha\) is the learning rate. Typically in real problems, when the robot reaches the goal location, the trajectories end. The value of such a terminal state is zero because the robot does not take any further actions beyond this state. We should modify our update to handle such states as

There can be situations when there are multiple deterministic policies that correspond to the same optimal value function; such ties can be broken arbitrarily because they have the same value function.

The policy used by the robot to collect data \(\pi_e\) is critical to ensure that Q-Learning works well. Afterall, we have replaced the expectation over \(s'\) using the transition function \(P(s' \mid s, a)\) using the data collected by the robot. If the policy \(\pi_e\) does not reach diverse parts of the state-action space, then it is easy to imagine our estimate \(\hat{Q}\) will be a poor approximation of the optimal \(Q^*\). It is also important to note that in such a situation, the estimate of \(Q^*\) at all states :math:`s in mathcal{S}` will be bad, not just the ones visited by \(\pi_e\). This is because the Q-Learning objective (or value iteration) is a constraint that ties together the value of all state-action pairs. It is therefore critical to pick the correct policy \(\pi_e\) to collect data.

We can mitigate this concern by picking a completely random policy \(\pi_e\) that samples actions uniformly randomly from \(\mathcal{A}\). Such a policy would visit all states, but it will take a large number of trajectories before it does so.

We thus arrive at the second key idea in Q-Learning, namely exploration. Typical implementations of Q-Learning tie together the current estimate of \(Q\) and the policy \(\pi_e\) to set

It is important to note that when we pick an exploration that depends upon the current estimate of the action-value function \(\hat{Q}\), we need to resolve the optimization problem periodically. Typical implementations of Q-Learning make one mini-batch update using a few state-action pairs in the collected dataset (typically the ones collected from the previous timestep of the robot) after taking every action using \(\pi_e\).

The dataset collected by the robot during Q-Learning grows with time. Both the exploration policy \(\pi_e\) and the estimate \(\hat{Q}\) evolve as the robot collects more data. This gives us a key insight into why Q-Learning works well. Consider a state \(s\): if a particular action \(a\) has a large value under the current estimate \(\hat{Q}(s,a)\), then both the \(\epsilon\)-greedy and the softmax exploration policies have a larger probability of picking this action. If this action actually is not the ideal action, then the future states that arise from this action will have poor rewards. The next update of the Q-Learning objective will therefore reduce the value \(\hat{Q}(s,a)\), which will reduce the probability of picking this action the next time the robot visits state \(s\). Bad actions, e.g., ones whose value is overestimated in \(\hat{Q}(s,a)\), are explored by the robot but their value is correct in the next update of the Q-Learning objective. Good actions, e.g., whose value \(\hat{Q}(s, a)\) is large, are explored more often by the robot and thereby reinforced. This property can be used to show that Q-Learning can converge to the optimal policy even if it begins with a random policy \(\pi_e\) (Watkins and Dayan, 1992).

This ability to not only collect new data but also collect the right kind of data is the central feature of reinforcement learning algorithms, and this is what distinguishes them from supervised learning. Q-Learning, using deep neural networks (which we will see in the DQN chapeter later), is responsible for the resurgence of reinforcement learning (Mnih et al., 2013).

We now show how to implement Q-Learning on FrozenLake from Open AI Gym. Note this is the same setup as we consider in Value Iteration experiment.

We are now ready to implement Q-learning: 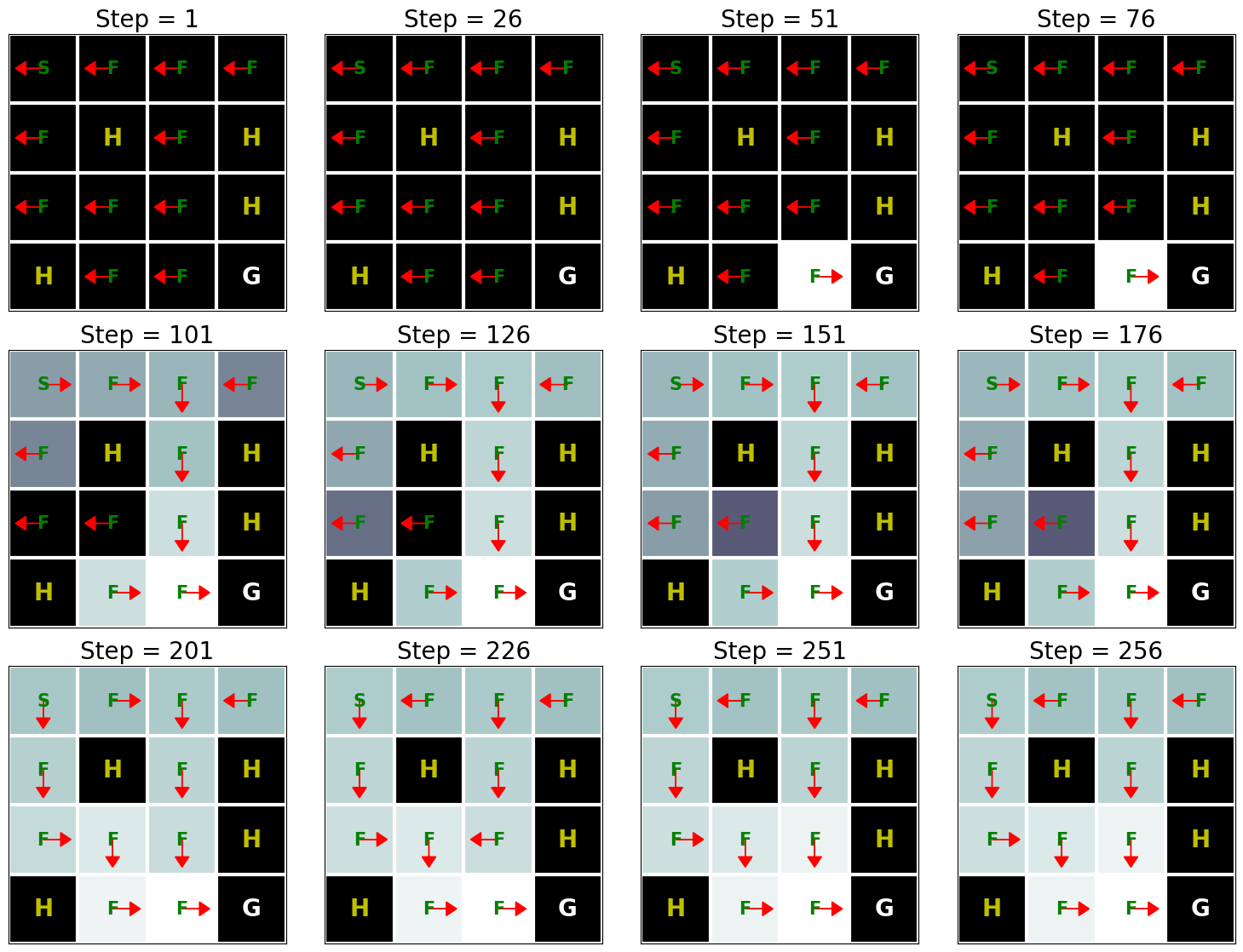 Q-learning is one of the most fundamental reinforcement-learning algorithms. It has been at the epicenter of the recent success of reinforcement learning, most notably in learning to play video games (Mnih et al., 2013). Implementing Q-learning does not require that we know the Markov decision process (MDP), e.g., the transition and reward functions, completely.