Imagine that you are watching movies on Netflix. As a good Netflix user, you decide to rate each of the movies religiously. After all, a good movie is a good movie, and you want to watch more of them, right? As it turns out, things are not quite so simple. People’s opinions on movies can change quite significantly over time. In fact, psychologists even have names for some of the effects:

In short, ratings are anything but stationary. Using temporal dynamics helped [Koren, 2009] to recommend movies more accurately. But it is not just about movies.

In short, we need statistical tools and new deep neural networks architectures to deal with sequence data. To keep things simple, we use the stock price illustrated in Fig. 8.1.1 as an example. 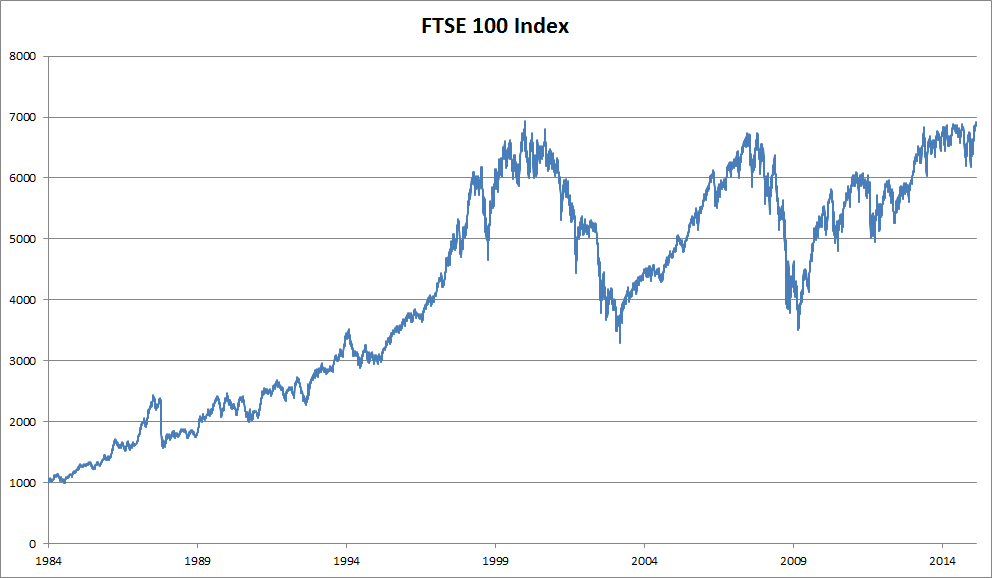 In order to achieve this, our trader could use a regressor such as the one we trained in Section 3.3. There is just a major problem: the number of inputs, \(x_{t-1}, \ldots, x_1\) varies, depending on \(t\). That is, the number increases with the amount of data that we encounter, and we will need an approximation to make this computationally tractable. Much of what follows in this chapter will revolve around how to estimate \(p(x_t \mid x_{t-1}, \ldots, x_1)\) efficiently. In a nutshell it boils down to two strategies:

Both cases raise the obvious question of how to generate training data. One typically uses historical observations to predict the next observation given the ones up to right now. Obviously we do not expect time to stand still. However, a common assumption is that while the specific values of \(x_t\) might change, at least the dynamics of the time series itself will not. This is reasonable, since novel dynamics are just that, novel and thus not predictable using data that we have so far. Statisticians call dynamics that do not change stationary. Regardless of what we do, we will thus get an estimate of the entire time series via

Note that the above considerations still hold if we deal with discrete objects, such as words, rather than numbers. The only difference is that in such a situation we need to use a classifier rather than a regressor to estimate \(p(x_t \mid x_{t-1}, \ldots, x_1)\).

Such models are particularly nice whenever \(x_t\) assumes only a discrete value, since in this case dynamic programming can be used to compute values along the chain exactly. For instance, we can compute \(p(x_{t+1} \mid x_{t-1})\) efficiently using the fact that we only need to take into account a very short history of past observations:

Going into details of dynamic programming is beyond the scope of this section, but we will introduce it in Section 9.4. Control and reinforcement learning algorithms use such tools extensively.

In principle, there is nothing wrong with unfolding \(p(x_1, \ldots, x_T)\) in reverse order. After all, by conditioning we can always write it via

In fact, if we have a Markov model, we can obtain a reverse conditional probability distribution, too. In many cases, however, there exists a natural direction for the data, namely going forward in time. It is clear that future events cannot influence the past. Hence, if we change \(x_t\), we may be able to influence what happens for \(x_{t+1}\) going forward but not the converse. That is, if we change \(x_t\), the distribution over past events will not change. Consequently, it ought to be easier to explain \(p(x_{t+1} \mid x_t)\) rather than \(p(x_t \mid x_{t+1})\). For instance, [Hoyer et al., 2009] show that in some cases we can find \(x_{t+1} = f(x_t) + \epsilon\) for some additive noise, whereas the converse is not true. This is great news, since it is typically the forward direction that we are interested in estimating. For more on this topic see e.g., the book by [Peters et al., 2017a]. We are barely scratching the surface of it.

After so much theory, let us try this out in practice. Let us begin by generating some data. To keep things simple we generate our time series by using a sine function with some additive noise.

Next we need to turn this time series into features and labels that the network can train on. Based on the embedding dimension \(\tau\) we map the data into pairs \(y_t = x_t\) and \(\mathbf{z}_t = (x_{t-1}, \ldots, x_{t-\tau})\). The astute reader might have noticed that this gives us \(\tau\) fewer data points, since we do not have sufficient history for the first \(\tau\) of them. A simple fix, in particular if the time series is long is to discard those few terms. Alternatively we could pad the time series with zeros. The code below is essentially identical to the training code in previous sections. We kept the architecture fairly simple. A few layers of a fully connected network, ReLU activation and \(\ell_2\) loss. Since much of the modeling is identical to the previous sections when we built regression estimators in Gluon, we will not delve into much detail.

Now we are ready to train.

Since training loss is small, we would expect our model to work well. Let us see what this means in practice. The first thing to check is how well the model is able to predict what happens in the next timestep.

This looks nice, just as we expected it. Even beyond 600 observations the estimates still look rather trustworthy. There is just one little problem to this: if we observe data only until timestep 600, we cannot hope to receive the ground truth for all future predictions. Instead, we need to work our way forward one step at a time:

In other words, we will have to use our own predictions to make future predictions. Let us see how well this goes.

As the above example shows, this is a spectacular failure. The estimates decay to a constant pretty quickly after a few prediction steps. Why did the algorithm work so poorly? This is ultimately due to the fact that the errors build up. Let us say that after step 1 we have some error \(\epsilon_1 = \bar\epsilon\). Now the input for step 2 is perturbed by \(\epsilon_1\), hence we suffer some error in the order of \(\epsilon_2 = \bar\epsilon + L \epsilon_1\), and so on. The error can diverge rather rapidly from the true observations. This is a common phenomenon. For instance, weather forecasts for the next 24 hours tend to be pretty accurate but beyond that the accuracy declines rapidly. We will discuss methods for improving this throughout this chapter and beyond.

Let us verify this observation by computing the \(k\)-step predictions on the entire sequence.

This clearly illustrates how the quality of the estimates changes as we try to predict further into the future. While the 8-step predictions are still pretty good, anything beyond that is pretty useless.